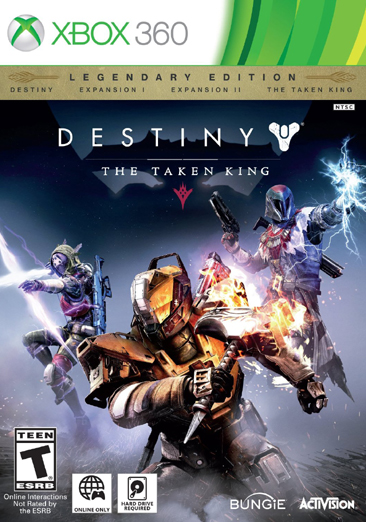 Be the first to rate this item

Destiny: The Taken King delivers the next great adventure in the Destiny universe.

Destiny: The Taken King - Legendary Edition is perfect for new and existing Guardians that are ready to jump into the Destiny universe or continue to carve their legend in the stars. The Legendary Edition features the complete Destiny experience including The Taken King, the next evolution in the Destiny universe, Destiny, Expansion I: The Dark Below and Expansion II: House of Wolves. Unite with 20 million Guardians in the fight to defeat Earth's enemies, reclaim all that we have lost, and Become Legend.

The Taken King:
A dark shadow has fallen over our worlds. Oryx, The Taken King, is hell-bent on vengeance and is raising an army of corrupted ''Taken'' forces by manipulating the Darkness itself. You must find a way into his impenetrable Dreadnaught ship to defeat The Taken King before he and his dark army consume our civilization and bring our solar system to ruin.

Destiny: The Taken King, the next great adventure in the first person shooter Destiny universe, introduces a new story campaign and quests, new enemies to fight, new locations to explore, new Strikes and Crucible maps, a new Raid that will put players to the ultimate test, and more. To stand up to the challenge, players will have access to three new devastating Guardian subclasses, and a massive arsenal of weapons, armor, and gear.

VIP REWARDS*
As a thank you to our most loyal fans who have reached Light Level 30 or who previously purchased Expansion I and Expansion II by August 31, 2015, you will receive an exclusive commemorative Founder's Fortune Year 1 Emblem, Sparrow, Armor Shader and more at launch with your purchase of The Taken King. Many Guardians serve the City, but tales of your bravery will echo through time. Return to the Tower on September 15. Its champions wish to celebrate and commemorate your accomplishments. May these gifts prepare you for the battles to come.

Feature Highlights:
Powerful New Abilities
To battle back the Darkness and the Taken army, players will get brand new subclasses with new supers. Warlocks will now harness the power of an electric storm, Hunters will carve a bow formed from gravitational void energy, and Titans will summon a flaming hammer that can sear their adversaries from a range or deliver a devastating melee impact.

New Campaign
A massive Hive Dreadnaught ship looms in the rings of Saturn. Oryx, The Taken King has arrived in our solar system, bringing with him a corrupted army to exact revenge on the Guardians who destroyed his son Crota, and to consume our worlds. Arm yourself with newfound abilities, weapons, and gear. Defeat the Taken hordes. Make your way aboard the Dreadnaught, and face Oryx himself within his inner sanctum.

New Locations
The amazing Destiny universe continues to expand - Infiltrate a Cabal base on Phobos, and establish a beachhead on Oryx's flagship the Dreadnaught a mysterious, loot-filled fortress. Charge into the Crucible where all-new competitive multiplayer maps await you and your Fireteam.

Level Cap Increased and All-New Gear
Fill your arsenal with brand new weapons and armor. Find and collect new, powerful Exotics while continuing to level up in the Destiny universe.

Access the Complete Destiny Universe alongside The Taken King:

Destiny
You are a Guardian of the last safe city on Earth, able to wield some of the Traveler's incredible power. Destiny is a next generation first person shooter featuring an unprecedented combination of cinematic storytelling, cooperative, competitive, and public gameplay, and personal activities that are woven into an expansive, persistent online world. Venture out alone or join up with friends. The choice is yours. Become Legend.

Expansion I: The Dark Below
Beneath the surface of the Moon, a long-forgotten enemy stirs. Survive the true depths of the Hellmouth, and stop its dark army from invading Earth. Expand your Destiny adventure with a wealth of weapons, armor, and gear earned in new story missions, three new competitive multiplayer arenas, and a new cooperative Strike and Raid.

Expansion II: House of Wolves
Only the bravest Guardians will hunt down the rising Fallen threat and lay claim to the mysterious treasures of The Reef. Discover where your legend will take you next with a wealth of weapons, armor, and gear to earn in new story missions, three new competitive multiplayer maps, and a new cooperative Strike. Expansion II introduces a new competitive elimination mode in the Crucible and an all-new arena activity The Prison of Elders.


A minimum of 60 GB available hard drive storage space required for PS4 and Xbox One, and a minimum of 30 GB storage space required for PS3 and Xbox 360 as of September 2015. Storage space requirements are subject to change and may increase. If you are purchasing after September 2015, please visit www.destinythegame.com/size-requirements for current storage requirements prior to purchase. Additional storage may be required for setup, some updates and features. There may be mandatory in-game updates which users must download to continue playing and which may require additional storage. Storage requirements subject to change. Broadband internet required. Users are responsible for broadband access and usage fees. Additional charges can apply for online content and some features. Various elements and functionality of PS4 Destiny Game require subscription to PlayStation Plus, sold separately. Various elements and functionality of Xbox One and Xbox 360 Destiny Game require subscription to Xbox Live, sold separately. Please see www.destinythegame.com for further details. Terms and conditions apply.


Â© 2015 Bungie, Inc. All rights reserved. Destiny, the Destiny Logo, Bungie and the Bungie Logo are among the trademarks of Bungie, Inc. Published and distributed by Activision. Activision is a registered trademark of Activision Publishing, Inc. Activision makes no guarantee regarding the availability of online play or features, and may modify or discontinue online services at its discretion without notice, including for example, ceasing online service for economic reasons due to a limited number of players continuing to make use of the service over time. Using the software constitutes acceptance of the Destiny Software License Agreement available at http://support.activision.com/license and the Terms of Service and Privacy Policy available at http://www.bungie.net/eula. The rating icon is a trademark of the Entertainment Software Association. All other trademarks and trade names are the properties of their respective owners.

Notify me when Destiny: Taken King Legendary Edition on PlayStation 4 is back in stock

Notify me when Destiny: Taken King Legendary Edition on XBOX ONE is back in stock